Providing management, coordination, and vision to further environmental health research in the Southwest.

The Administrative Core provides oversight and coordination of Southwest Environmental Health Sciences Center (SWEHSC) activities. The SWEHSC is a leader in interdisciplinary research at the University of Arizona (UA).

The SWEHSC AC promotes research excellence in the environmental health sciences (EHS) by facilitating SWEHSC initiatives on the UAHS campus, statewide, nationally, and internationally. Indeed, several of the significant strengths highlighted throughout this application have been the direct result of the leadership of the SWEHSC AC, including our success in community outreach to native and indigenous populations, the international recognition of our research focus area strengths, and the integration between our FCs and the research focus groups. The AC (i) provides an administrative framework to advance the intellectual and technological expertise of its members, (ii) provides leadership that creates an environment conducive to the development of interdisciplinary research, (iii) assists members in identifying translational research opportunities, and (iv) develops personal and professional opportunities for members to become national and international leaders in EHS.

The Specific Aims of the Administrative Core are to:

The SWEHSC has the organizational structure and facilities needed to conduct its activities. UA is a state-supported, land grant university that operates under the auspices of the Arizona Board of Regents (ABOR). The UA President, Dr. Robert Robbins, reports directly to the Board. The recently appointed Dean of the College of Pharmacy (Rick Schnellmann) is also a SWEHSC member and NIH funded researcher who has direct oversight of the Center for Toxicology. The Center for Toxicology, commissioned by the ABOR, houses the NIEHS programmatic initiatives including the SWEHSC and the Super Fund Research Program, the NIEHS T32 Training Program in Environmental Toxicology of Human Disease, and the R25 EHS-TRUE Undergraduate Research Training Program, which greatly enhance the EHS research environment at UA. This organization is directed by Dr. Nathan Cherrington and remains an integral part of the UAHS. The organizational structure of the SWEHSC is shown below.

Figure 1. Organizational Structure of the SWEHSC 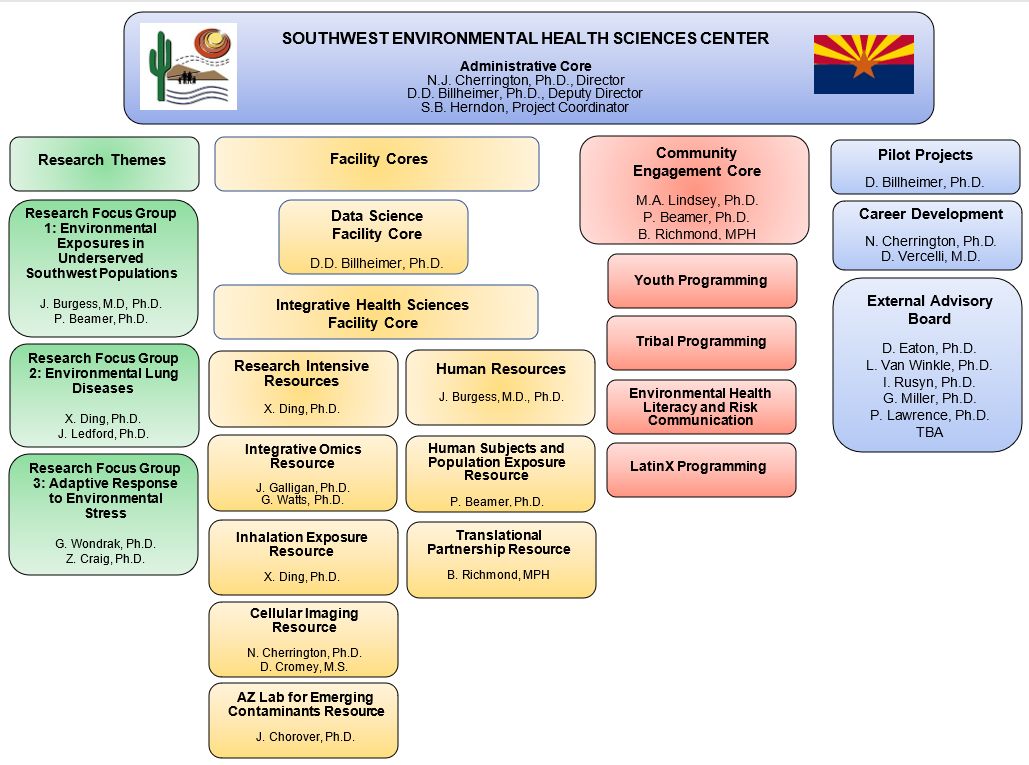 The Internal Advisory Board (IAB) assists the Director in leading SWEHSC activities and functions in oversight, evaluation, management, and direction roles. The constitution of the IAB includes all Directors of the various Facility Cores, the Research Focus Group Directors and Co-Directors, the Director and Co-Director of the Community Engagement Core , the Seminar Coordinator, and the Pilot Project Coordinator. The IAB assists the Center Director in making scientific and administrative decisions and in the allocation of resources. The IAB is responsible for funding decisions following the peer review of Pilot Project applications. The IAB reviews activities, discusses strengths and weaknesses, and sets the direction for future activities. Key changes that have resulted from such oversight include the reorganization of the RFGs and FCs, the appointment and retention of SWEHSC investigators, small-scale flexible funding levels for Pilot Projects, and ultimately a redefinition of the role of the IAB. Additionally, the IAB evaluates SWEHSC investigators on an annual basis for continued appointment.

Paloma Beamer (RFG1 Co-Director). Paloma Beamer, Ph.D., has benefited directly from the SWEHSC Career Development and serves in the IHSFC. She also serves as a co-I for the UA component of the NIH Environmental influences on Child Health Outcomes (ECHO) and is a lifetime member of the Society for Hispanic Professional Engineers (SHPE) and the Society for the Advancement of Chicanos and Native Americans in Science (SACNAS).

Dean Billheimer (IHSFC Director). Dean Billheimer, PhD, is Director of the UA Statistics Consulting Laboratory and has over 20 years of experience in statistical consulting and scientific collaboration spanning laboratory, translational, clinical, and public health studies. In addition to collaborative research, he has been a key investigator in NIH funded projects aimed at developing new statistical methods in proteomics measurement, the analysis of high-dimensional ‘omics’ data, and evaluating the predictive properties of novel biomarkers.

Jefferey Burgess (RFG1 Director, IHSFC Co-Director). Dr. Burgess is the Associate Dean for Research at MEZCOPH. Dr. Burgess has worked effectively to bring more public health researchers into SWEHSC and has extended the work of SWEHSC to address the health effects of environmental exposures in American Indian and Alaska Native populations in the Center for Indigenous Environmental Health Research (CIEHR), funded by the NIEHS and EPA.

Bernard Futscher (RFG3 Director, Genomics FC Co-Director). Dr. Futscher is the founding director of the Genomics Shared Service and has been responsible for the development and implementation of genomic and epigenomic tools. Dr. Futscher is highly respected for his service on NIH study sections, editorial responsibilities, and scientific contributions with an h-index of 44 (google scholar) and 94 primary research articles (PubMed).

Walt Klimecki (CEC Co-Director). Dr. Klimecki is currently the Interim Chair of the Department of Pharmacology and Toxicology and is the Program Director of the NIEHS-funded R25 grant aimed at providing research experience and training to underrepresented undergraduates.

Clark Lantz (Deputy Director, Cellular Imaging FC Director, RFG2 Director). Dr. Lantz has served as the Deputy Director fo the SWEHSC since 2000. He has served as the Director of the Cellular Imagig Facility Core since the SWEHSC was first funded in 1993. He also serves as the leader of RFG2. Dr. Lantz has received the Inhalation and Respiratory SOT Specialty Section Career Achievement Award in recognition of his efforts in pulmonary toxicology.

Richard Vaillancourt (Seminar Coordinator). Dr. Vaillancourt has served on the Superfund Research Program Steering Committee and as the president of the Mountain West Regional Chapter and the Mechanisms Specialty Section of the SOT.

Georg Wondrak (RFG3 Co-Director). Georg Wondrak, Ph.D. is a SWEHSC career development success and is now a tenured Associate Professor and the elected president of the American Society for Photobiology, the world's leading scientific organization representing the photochemical, photobiological, and photomedical sciences.

Donna Zhang (RFG2 Co-Director, Pilot Project Director). Donna Zhang is a highly prolific and highly cited researcher who has made seminal contributions to both the mechanistic understanding of Nrf2 regulation and the dual role of Nrf2 in human disease. She has served on multiple NIH study sections and editorial boards.

The External Advisory Board (EAB) is appointed by the Center Director following consultation and input from the Internal Advisory Board (IAB). The EAB provides an independent assessment of SWEHSC programs and progress and insight for future direction. Members of the EAB are all distinguished scientists selected for their excellence in specific areas of research and for their familiarity with the research activities of SWEHSC investigators. It should be noted that all EAB members have expertise in human gene-environment interactions and in the genetic predisposition of human populations to environmental disease. In addition, their expertise in “translational research” is particularly invaluable. EAB members also have considerable experience in program administration, grant and manuscript review, and multidisciplinary initiatives. The EAB appreciates the nature in which collaborative, interdisciplinary efforts can lead to major scientific advances.

Dr. John DiGiovanni, Professor and Coulter R. Sublett Chair in Pharmacology, Division of Pharmacology and Toxicology, Department of Nutritional Sciences, University of Texas Austin. Dr. DiGiovanni’s research focuses on the identification of critical targets and mechanisms involved in the initiation and promotion stages of chemical as well as UV skin carcinogenesis and prevention.

Appointment as a SWEHSC investigator is based on the following criteria, which serve as guidelines for new and continuing appointments.

Currently, there are 4 key SWEHSC personnel and 48 investigators who are members of one or more of the three Research Themes. Although the members are listed by their primary research themes, collaboration and interactions across themes occur, and are encouraged with support by SWEHSC.

Key personnel are defined as SWEHSC participants who play an active and essential role in the Center, either within the FCs or as advisors. These include two FC Directors (D. Billheimer and G. Watts), an FC Manager (D. Cromey), and the CEC Director (M. Lindsey).

The SWEHSC has set goals to nurture the emergence and development of new research themes and programs within the center.